August was on balance a negative month for global equities, but to anyone watching reasonably closely, the results could have been much worse. Trade wars, political turmoil in the UK and confirmation of a gathering European continent recession buffeted US equities on several occasions during the month. Steep declines were followed closely by equally strong rallies with net change at month’s end moderately lower.

International and Emerging Market indexes were also down for the month but note that despite widespread talk of the negative impact of trade conflicts and ongoing economic slowdowns outside our borders, YTD global returns, apart from Emerging Markets, remain strongly positive. Performance of representative global equity indexes for August and for the YTD 2019 are below.

In the credit markets, yields declined for shorter and intermediate term US Treasury instruments during August. Yields were modestly lower for the shortest maturities and the 30-year bond, but five and ten year notes saw yields sink to near historic lows. Inversion of the Treasury yield curve continued during the month as bond buyers and sellers await the next Federal Reserve meeting in mid-September. At this writing a cut in the Fed Funds rate of ¼% - ½% is forecasted to be announced at that time.

On August 21, Germany sold 30-year government bonds at a negative yield for the first time. To explain, this means that a creditor lending the German government money by purchasing bonds is agreeing to not only receive no interest payments during the life of the bond, but also to accept less principal at maturity than the amount tendered on the acquisition date. There are a variety of explanations for why anyone would enter into such a transaction, but one possible conclusion is that Germany’s economy is contracting to the extent that government borrowing needs cannot support positive interest rates without exacerbating existing downward pressure on growth.[1]

In this context, even the depressed yields offered by US Treasury debt look attractive. We could speculate that non-domestic buyers are snapping up US bonds in a search for returns. We could point out that inflation remains below the 3 month T-Bill rate. But we try to avoid speculation about short term trends. The press and pundits offer far more than needed already. Suffice to say that US Treasury yields are at or near historic lows after significant declines this year. Whether these levels will persist is unknown but at the current level of inflation, rates are not unreasonably low.

In July and into mid-August, there were widespread recession predictions as a result of the Treasury yield curve inversion. One of the early signs of a meaningful economic slowdown is the pace of new unemployment insurance claims. The figures are released weekly and are quite volatile. The numbers are typically seasonally adjusted to account for predictable events such as layoffs associated with the end of the holiday season.

Recently, a modest pullback in industrial production and manufacturing activity have been cited as new harbingers of recession by the press and some economists. There have been declines in the level of industrial production as reported by the Federal Reserve. The Fed’s index of Total Industrial Production has declined 0.9% from December 2018 through July 2019, the latest numbers available. However, the index remains 0.5% higher than its level in July 2018.[2] Is this pullback the beginning of an economic contraction? Or is it a reaction to uncertainty generated by trade talks between the US and China? We suspect the latter.

Below is a chart illustrating seasonally adjusted weekly initial unemployment insurance claims over the past year. If manufacturing and other economic sectors are truly scaling back activity, we would reasonably expect to see a significant increase in claims. So far, no noticeable increase is evident. 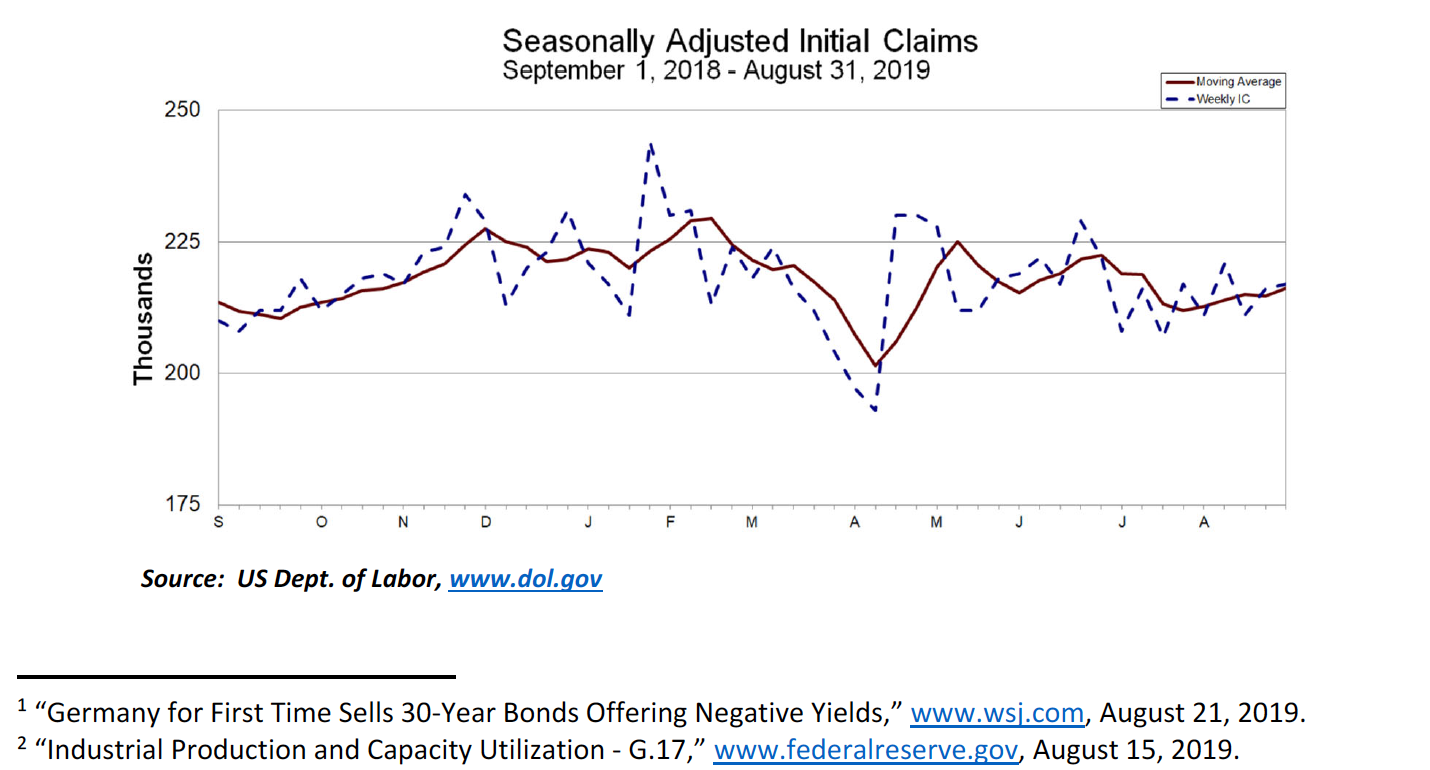 One question that could arise after reviewing these data is whether initial claims are translating into continuing unemployment. The chart below records the number of workers who have applied for and are currently receiving unemployment insurance during the 12-month period ending August 24, 2019. The seasonally adjusted results show an ebb and flow of plus or minus roughly 100,000 workers but no net uptrend, which would be expected if layoffs were accumulating and persisting due to diminishing economic activity.

The unemployment rate is a lagging indicator of economic activity. The number of unemployed as a percentage of the total workforce only begins to climb after the economy has begun to slow materially. However, new unemployment insurance claims are a leading indicator. The claims will begin to rise almost immediately in response to spreading layoffs. What we see in the two charts above is confirmation that worker layoffs are not tracking above trends in place over the past year. If the economy is going to begin slowing significantly due to decreasing manufacturing activity, these charts will early warnings. So far, so good.

August was a tremendously volatile month and as September trading opens, investors can be forgiven for desiring more “boring” activity. To date, US economic activity has been minimally impacted by a widespread trend toward GDP contraction outside our borders. Europe’s leading economy (Germany) has now added to the nearly $16 trillion of global debt outstanding that offer negative yields. This is not a manifestation of economic health.

One of the potential problems faced by world economies is that the current levels of interest rates, in many cases, do not offer an opportunity to stimulate growth via rate cuts. Resisting growing populist calls for lower taxes and less economic regulation is apparently dragging many economies off a figurative cliff.

Equity markets are the quintessential early warning signal of trouble on the horizon. While news on US/China trade talks has sparked sharp selloffs and equally sharp recoveries throughout the year, net gains for 2019 remain substantial. In the US, it is easy to forget that at this writing, broad equity benchmark indexes such as the S&P 500 and the DJTMI are trading at levels less than 2% below all-time highs.

America remains an island of growth, likely in part to actions taken in 2017 to cut corporate and individual tax rates and to remove myriad restrictive government regulations in the private sector. Investors focusing on their long term plans and successfully ignoring short term ups and downs of equity markets here and abroad remain solidly in the black for 2019.