Global equity markets ended the first month of 2021 mixed. After a slow start, US benchmark indexes registered new all‐time highs around the time of the Presidential Inauguration. Subsequently, activity was relatively subdued until volatility increased significantly and prices turned lower as the month closed.

Tech stocks carried the NASDAQ Comp to a moderate monthly gain, including several new highs during the period, but it was small cap issues that were standout performers. The Russell 2000 reached new record highs on several occasions during the month in a highly visible manifestation of the “January effect.”1

International trading followed roughly the same pattern as investors await tangible results from the intensive worldwide race to vaccinate the most vulnerable among us against the Covid‐19 virus. Emerging Markets held net gains and led the non‐US pack at month end. January performance for representative benchmarks is illustrated below.

The Biden Administration’s policy parameters are coming into sharper focus. Behind most domestic economic initiatives advanced in a series of Executive Orders, Mr. Biden has made clear that the overriding theme of his administration will be to combat anthropogenic climate change.

We certainly aren’t experts on climate science, but we are aware that widely divergent opinions exist surrounding the validity of models that have projected dire consequences from overabundant carbon-based emissions. Predictions by climate models two decades ago have not proven accurate. Nonetheless, a change in the direction of domestic economy activity is being mandated.

Employment of the better than 10 million Americans still out of work back to their former jobs or into new careers is one of the most daunting tasks facing the new administration. The deemphasis on obtaining power from fossil fuels that has characterized many of the President’s unilateral actions will reduce jobs in the energy sector, which has been among the strongest segments of the economy over the past 10+ years.

The US economy entered 2021 in a steady recovery, supported by expectations of further fiscal stimulus and a belief that widespread Covid‐19 vaccinations will enable the country to fully reopen. It is too early to detect the effects of a shifting impetus for domestic economic policy, but by the end of the first quarter, positive or detrimental effects of new initiatives should begin to emerge.

How many recovered or newly created jobs will be offset by losses in the fossil fuel industry is unknowable at this point. Weekly new claims for unemployment insurance remain stubbornly just below 1 million, which although a dramatic decline from last summer and fall, is a historically large number.

The essential question is whether a return to work as vaccines are administered will generate employment sufficient to absorb losses in oil and gas. The chart below illustrates new insurance claims over the past year. The solid line represents the monthly average, the broken line is weekly data. 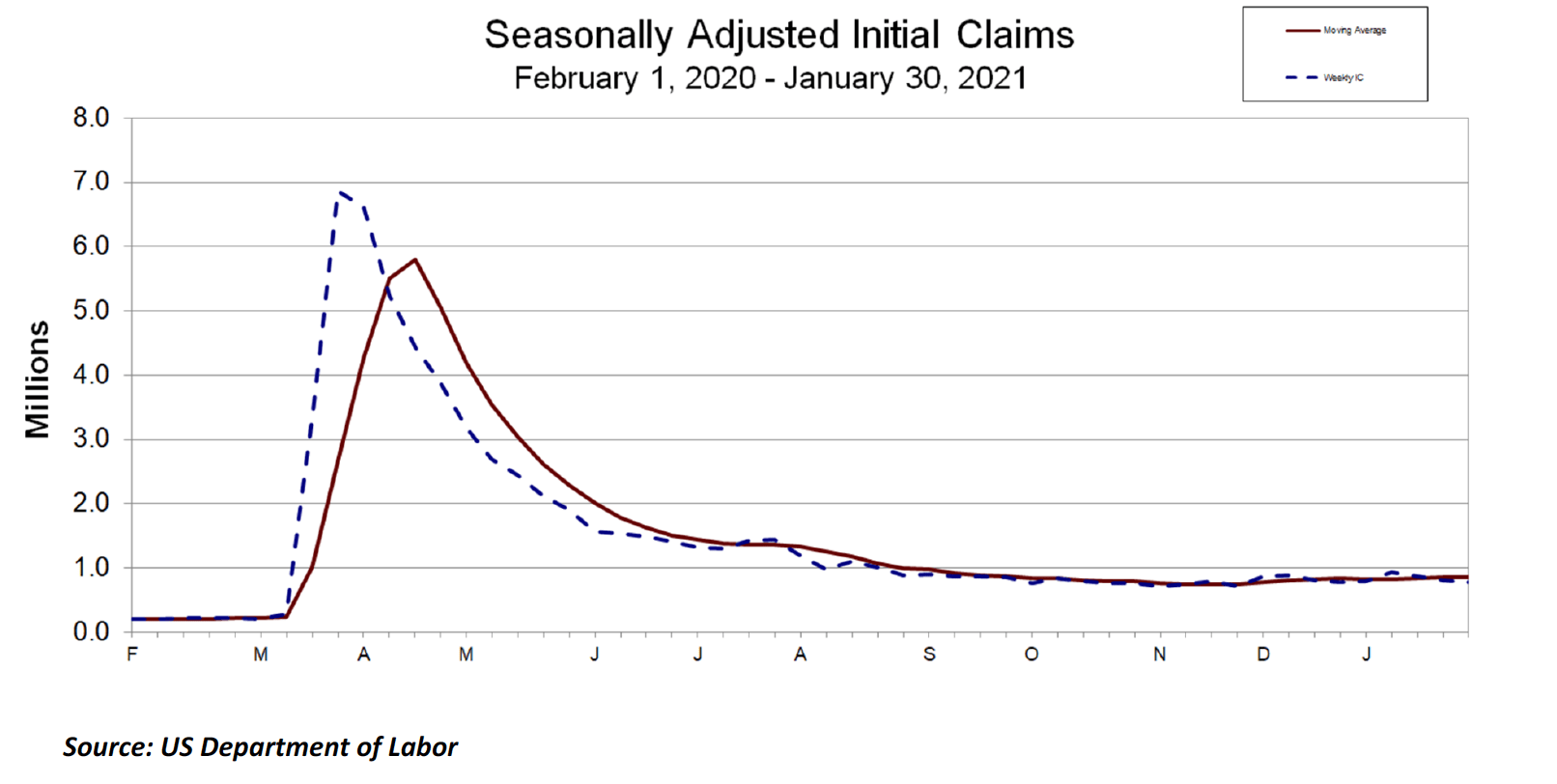 Presently, fossil fuels account for roughly 80% of total US energy consumption, a figure that has declined approximately 5% since the beginning of the Obama Administration. Coal usage has plunged as utilities shift fuels to natural gas but, despite myriad government development programs, public/private partnerships, tax credits, and generous subsidies, global oil consumption is projected to remain static at nearly 100 million barrels/day through at least 2040.2

The bottom line for the economy is that fossil fuels are here to stay for the foreseeable future and attempts to constrain production to spur wider use of alternative sources will not only increase consumer energy prices but also contribute to unemployment.

Demand for electric vehicles, for example, is driving a shift in auto production but there is currently no effective fossil fuel alternative to generate the electricity that powers recharging stations. This is one dilemma facing policy makers. Paradoxically, “green energy” autos are supporting fossil fuel demand. The chart below illustrates world energy consumption by source as of 2019, the most recent annual data available.

Credit markets are undergoing a sea change of sorts. During January, intermediate and long term US Treasury yields rose and are approaching levels not seen since before the Fed’s aggressive easing last spring as the chart below shows. 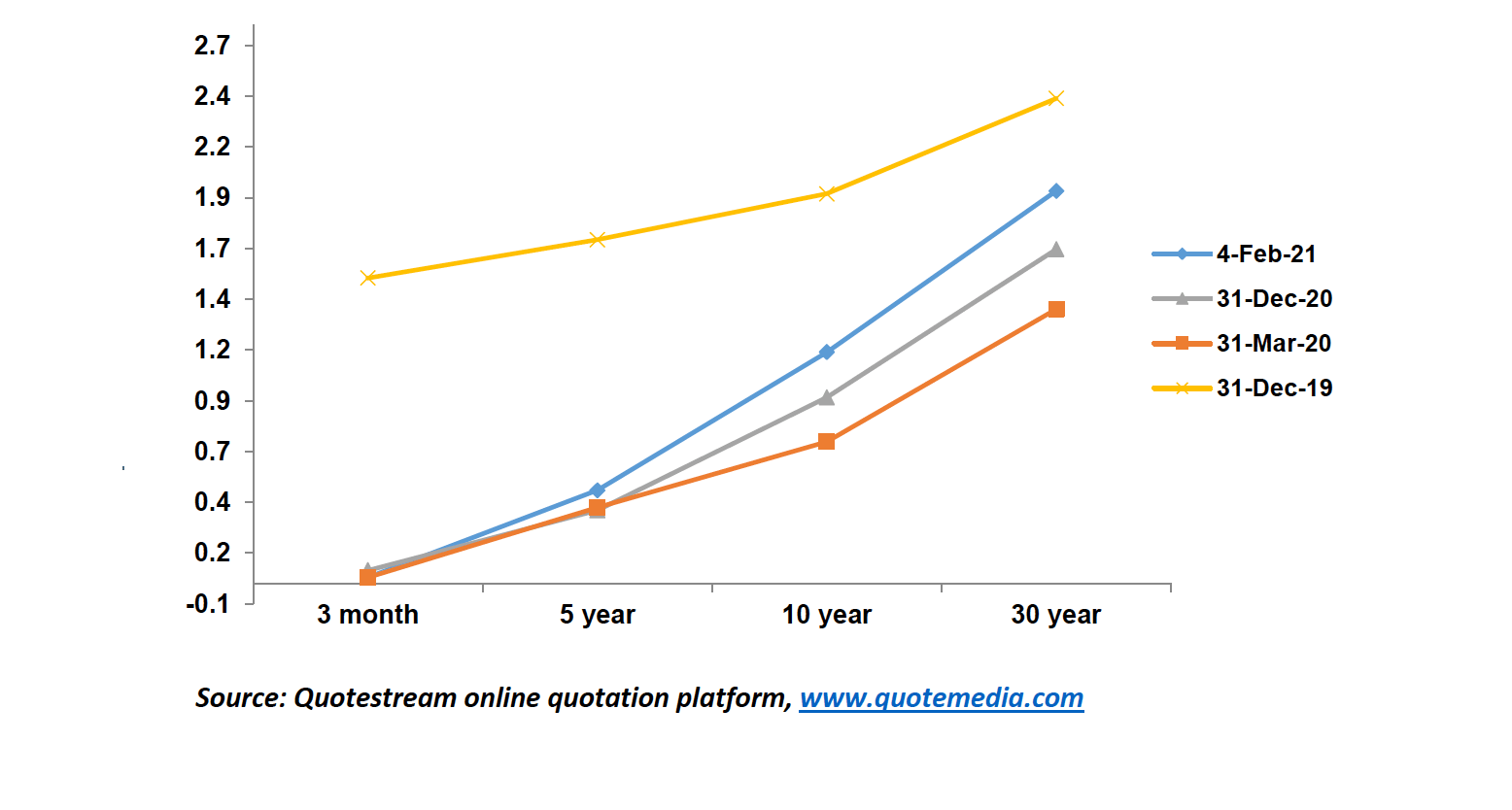 Health in the financial sector is critical to extending the economy’s recovery. The yield curve’s steepening slope is good news for banks and other lending institutions that borrow at short term rates and lend for longer terms. As intermediate and long term maturity yields increase relative to short term, the widening spread between the two enhances loan profitability.

The full effect of domestic policy changes and areas of emphasis in expenditures will not be discernible for several months, perhaps longer. Investors, so far, appear relatively sanguine about prospects for the US economy to extend its recovery and are clearly reassured by Treasury Secretary Yellen’s firm assertion, during her confirmation hearings, that no significant changes in tax policy or rates should be expected immediately.

Last year’s broadening of the US market rally into small cap and value equities, which have languished for multiple years, has extended into 2021 and is a positive sign for the market’s upside endurance. Whatever changes Mr. Biden and the Democrat Congress ultimately precipitate will be quickly discounted by investors and in the absence of measures that significantly diminish the prospects for further growth, we expect equities to continue, on balance, recent positive performance.

1 A perceived but not axiomatic or automatic tendency for small cap equities to outperform the broader market during January. The assumption is that investors take profits in appreciated holdings at year end then reinvest in more speculative small cap issues at the beginning of the following year. 2 “World Energy Outlook 2020,” www.iea.org, September 2020.