After several near misses over the past few months, two broad based US equity indexes posted all-time highs yesterday. New territory for the DJTMI and the S&P 500 was reached for the first time since late July with the NASDAQ Composite index closing less than 0.1% under its comparable high. The widely followed but far narrower Dow Industrials and Transportation Indexes remain below their record highs by approximately 1% and 6% respectively.

The Russell 1000 Value index of large cap value equities has also bettered its previous peak, extending the increased strength in this sector of the equity markets that began to appear roughly six weeks ago. Despite news reports of a looming recession throughout the summer and early fall, investors remain optimistic about the US economy as third quarter earnings begin to take shape. A two year history of the DJTMI is below.

What is the market seeing? Economic indicators remain on balance positive, but measures of manufacturing activity have been slowing for several months, largely attributable to trade policy uncertainties as well as the recently settled six week long GM strike. Should we expect this softening trend to spread to other sectors of the US economy? Judging by the market’s action, investors remain sanguine about continued growth. In trade talks the US’s aggressive tactics could be working, providing a framework for alleviating short term tariff related pain in agriculture and manufacturing.

Over the past several weeks investor sentiment has improved in the trade arena due to demonstrable progress after the resumption of China/US negotiations. We’ve documented the deterioration of the Chinese economy this year, which it is logical to believe is at least partially a result of significant drop-offs in exports to the US. The tariff regime put in place by the Trump administration to compel China to modify its trade practices, corporate ownership structures and intellectual property theft has quite possibly contributed to a reduction in Chinese recalcitrance.

Despite assertions that the US would suffer relatively more than China in this “war,” it is clearly the Chinese who have “sued for peace” by tentatively agreeing to increase purchases of US agricultural products two weeks ago.

President Trump announced earlier this month that “Phase One” of an agreement has been all but signed, suggesting that significant progress toward attainment of US goals has occurred.1 Compare the chart of the Hang Seng index below to the progress of the DJTMI above. This Hong Kong index is a proxy for Chinese equity performance. It is clear which country’s corporations are suffering more from the conflict and why the Chinese are seeming more amenable to reaching a new trade arrangement with the US.

In the US credit markets, normalization of the Treasury yield curve has continued in advance of the Federal Reserve’s meeting this week. Traders expect another ¼% cut in the Fed Funds rate, which would lower the target range to 1 ½% - 1 ¾%. Meanwhile, yields in the intermediate and long term Treasury market have risen steadily from their late summer lows. The net effect of increases at the five, ten and 30 year points on the curve coupled with continuing downward pressure on the shortest rates has largely corrected the inversion that has persisted since the Spring.

During yesterday’s trading session, the inversion, with five and ten year yields near or lower than the 3-month Bill’s, finally disappeared. Recall that when this anomaly first appeared, many pundits and the press breathlessly identified it as a sure sign of impending recession. The current Treasury yield curve compared to September 30, 2019 is below. There has been a great deal of change in the past month. 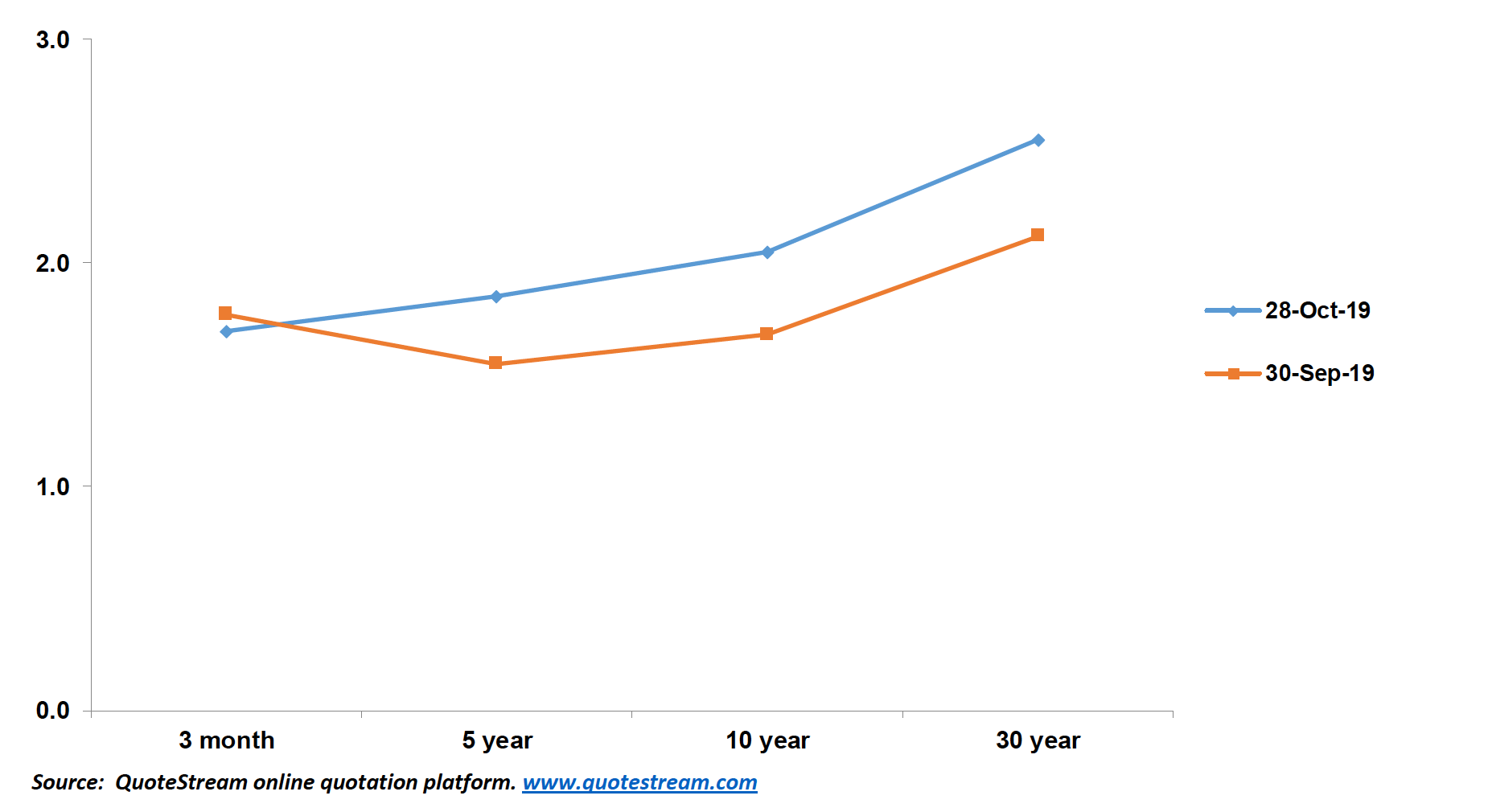 We have noted previously that a normally sloped yield curve is good news for banks and for less than high quality borrowers. As the spread between shorter term borrowing costs for financial institutions to fund longer term lending widens, credit for less than prime corporations should become more plentiful, in some cases providing an essential cash flow supplement. We have hypothesized that freeing up the flow of credit could be a factor in the resurgence of value company equity performance.

A quick word about two ongoing political sagas. In the UK, the official Brexit deadline remains October 31, however, late last week the EU agreed to an extension of the drop dead date to January 2020. PM Johnson has been seeking a General Election in hopes of gaining a meaningful Conservative majority. This effort, until a few hours ago, had been thwarted by an existing law requiring consent of the minority. Mr. Corbyn, the Labour Party leader has now agreed to back a resolution in Parliament authorizing the election, which is tentatively scheduled for December 15.3 The vote is scheduled for later today.

If the Tories gain sufficient seats to control Parliament, two scenarios come into play. First, repeal of the recent prohibition of a no-deal Brexit or second, the adoption of Mr. Johnson’s negotiated Withdrawal Agreement. Without a change in the composition of Parliament, at present, neither of these outcomes appears possible.

At home, Speaker Pelosi has announced that a vote to formally authorize the ongoing impeachment inquiry will be taken on the House floor October 31.4 The House Intelligence Committee has, to date, conducted seven depositions in secret, but the implication of a positive vote is that public hearings could commence in November.

Testimony detrimental to the President continues to leak from the closed proceedings with Republicans prohibited from releasing any potentially contradictory information gathered during their cross-examinations.

There are roughly 30 Democrats representing districts that voted for President Trump in 2016. It will be interesting to learn whether these potentially vulnerable members will back the inquiry. The process remains somewhat of a faux impeachment however, as Thursday’s vote is to simply authorize the inquiry, not to vote on Articles of Impeachment. Stay tuned.

Patient investors have been rewarded with strong equity performance this year. Despite the preponderance of negative press concerning the US economy’s health, it is notable that as of yesterday’s new high close, the S&P 500 is up more than 21% for 2019. If we ignore noise from the press and political crosswinds, the market is sending a signal that continuing economic expansion lies ahead.