Global share values continued to rise during the first three months of 2021. The equity markets, buoyed by reopening economies, particularly in the US, extended the upswing in prices that has remained intact since late March last year.

Noteworthy in this period was the strong performance of both small capitalization and value companies, asset classes that have languished for the past several years as large capitalization and growth issues led many market benchmarks higher. As the table below details, these more risky and volatile stocks rewarded adventurous portfolios with strong double digit gains in the quarter. Performance of key global equity benchmark indexes as of March 31, 2021 are below.

In view of posting this quarter’s largest gain, we’ve added the Russell 2000 Value Index to our stable of index yardsticks. Readers have seen this name frequently over the past two quarters and are familiar with its composition of smaller companies with less than pristine balance sheets.

The surging US economy is carrying prices higher for these companies, long neglected in favor of the flashier, high price‐earnings (PE) multiple, large capitalization growth sector, perhaps best represented by the technology and online merchant issues in the NASDAQ Composite Index (the Comp).

However, as we noted last fall, this group of companies, whose proxy is the so‐called FAANG1 stocks, has enjoyed nearly a decade of growth at rates faster than the overall market. The historical record of similar favored performance periods suggests that the next decade may produce relative underperformance. The chart below, courtesy of Dimensional Fund Advisors, which we first cited last fall, illustrates a well established pattern, incorporating data from 1927‐2019. 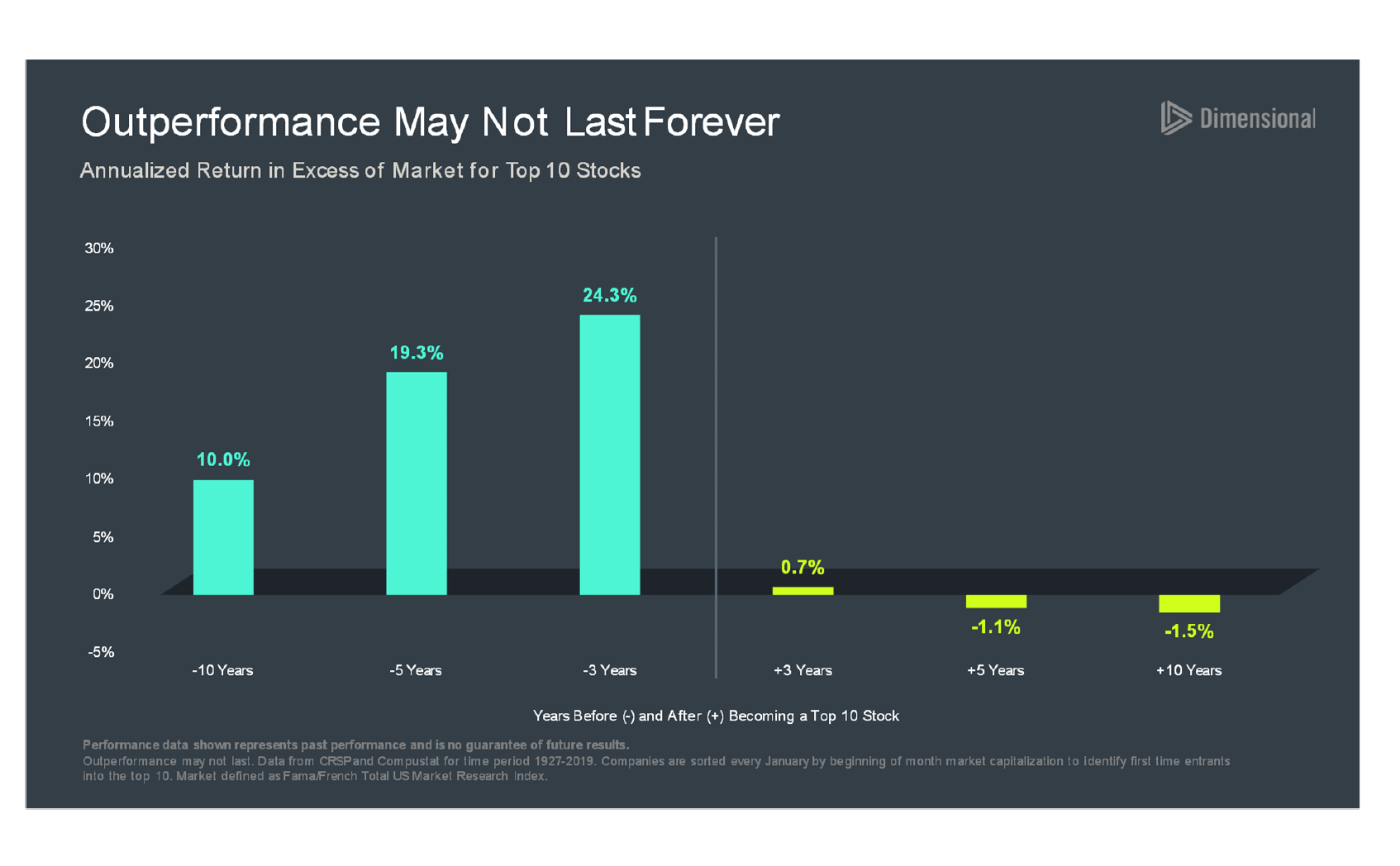 Of course, it is conceivably far too early to conclude that the performance of the group that led the markets from their late‐March 2020 nadir has irrevocably diminished for the next 10 years, but certainly the Comp has switched from a leadership position to one of a near laggard over the course of the first quarter, supplanted by lower PE, smaller companies poised to excel as economic conditions improve.

Bond market yields rose steadily during the first quarter, reflecting a re-acceleration of economic growth. While on a percentage basis, the moves were significant when compared to year end levels, the absolute cost of borrowing remains low by historical standards.

Bond investors have been casting a cold eye on trillions of dollars pumped into the US economy by not only Congress, through multiple COVID relief packages, but also the Federal Reserve. Markets are used to the Fed digging its heels in against unchecked deficit spending but first in the 2009‐2014 recovery and now since mid‐February last year, Fed Chairmen Janet Yellen and subsequently Jerome Powell have encouraged Congress to spend freely with minimal accompanying admonitions to generate offsetting revenue.

Despite Mr. Powell’s firm and, so far, unshakeable intent to continue bond purchases at all government bond market maturities and to keep short term rates pinned near zero, those with long memories have become persuaded that, eventually, the Fed will be forced to address downward pressure on the US dollar that could develop as a flood of greenbacks inundates the US economy. US Treasury yield curves from December 31, 2019, December 31, 2020 and March 31, 2021 are shown on the following below. 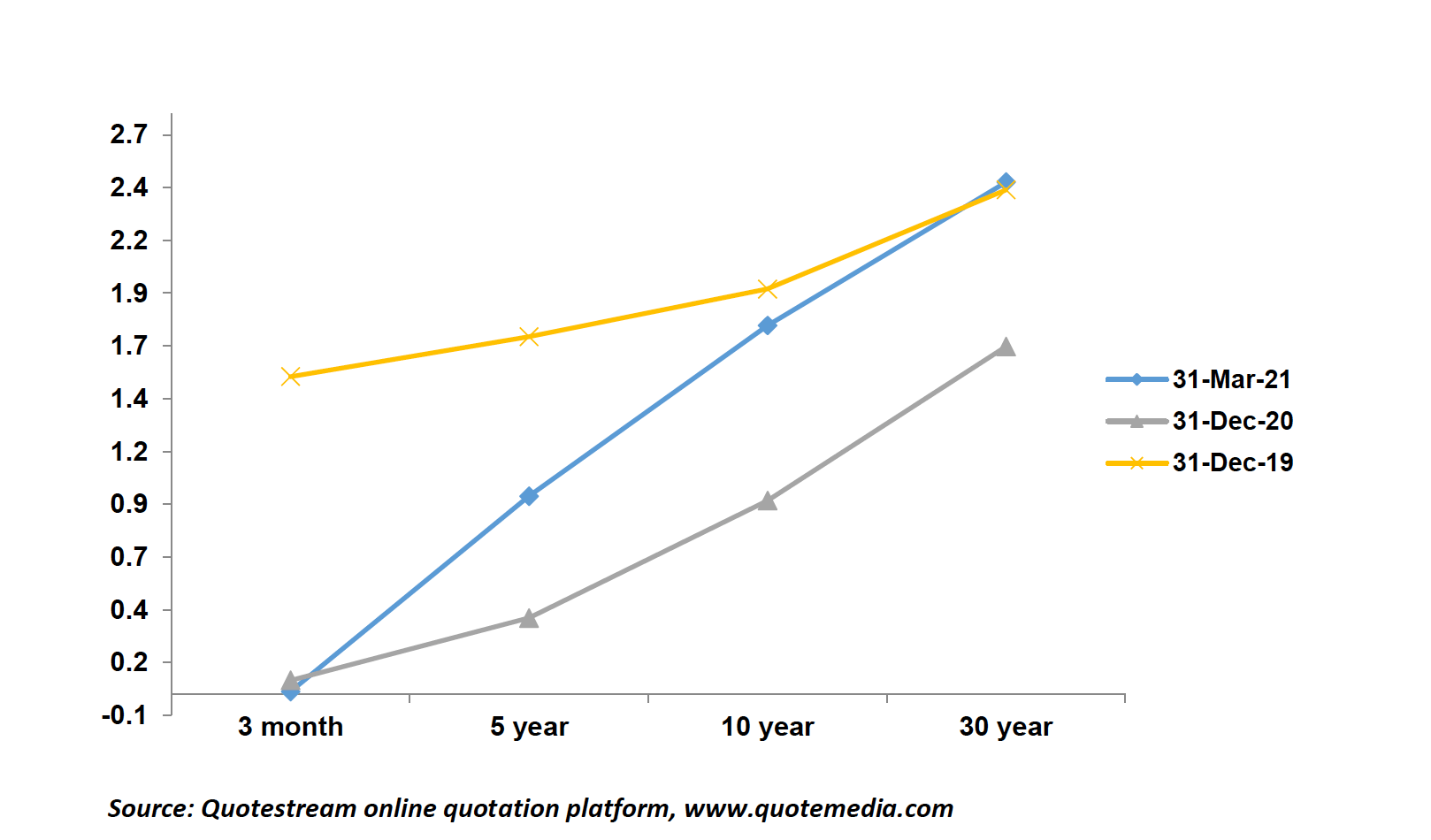 The financial press and others warned throughout the quarter that interest rates are reaching levels that will negatively affect the economy and that the seemingly endless flow of newly created dollars will lead to an inflationary spiral.

It is a truism that higher interest rates are inflationary since they directly influence the cost of credit, which is the lifeblood of the US and other global economies. Certainly, the better than 150% increase in the yield of the Treasury’s five‐year note since the end of 2020 has impacted the expense of short term borrowing for companies and individuals active in this maturity band.

Similarly, a 90% jump in the 10‐year yield has resulted in moderately higher mortgage rates, but hardly to a level that would begin to squeeze home buyers out of the market. Housing prices continue to soar in many areas of the country, so apparently, there has been little significant deterioration of access to mortgage financing other than at the margins of loan eligibility.

As economic activity continues to expand here and abroad, the demand for credit can naturally be expected to increase. More growth equates to greater need for credit to finance inventories, acquisitions or simply to fund ongoing production expenses.

So, are rising interest rates a problem, or not? Are higher rates reflecting inflationary pressures or are they creating inflation?

If hand wringing and dire predictions in the press are ignored, it is obvious in the above chart that US Treasury rates remain lower and at some maturities, much lower, than on December 31, 2019, before most of the world had heard of COVID‐19. The exception is the longest maturity (30 years), which at the end of the first quarter of 2021 was a nominal 0.04 % higher than at year‐end 2019.

Does this sound like a runaway race to higher borrowing costs that could bring the recovery to a screeching halt? Short answer? No.

The S&P 500 closed 2019 at 3231 and at the end of 2020, was 3756 (after plunging roughly 35% in a 6‐week period during the Feb‐Mar COVID selloff). The 2021 first quarter close was 3973. Surely, if the upturn in interest rates over the past three months was a threat to the economy and corporate earnings, it would not be unreasonable to expect that this widely followed index would be sinking, not rising.

The first quarter was the beginning of transition to a new Presidential regime. The second quarter will begin to reveal the intent of Mr. Biden’s leadership. From an economic and equity market perspective we see two competing forces that will affect investors.

Multiple stimulus packages over the past 12 months provided a support net for the economy and built a foundation for strong recovery. However, should taxes for both corporations and individuals increase to levels under discussion and consideration in Congress and the Biden Administration, we can expect a slowing of growth next year. Markets will react well in advance.