On February 19, 2020, the S&P 500 recorded its highest ever close at just over 3386, up 4.8% for the year. 2020 was off to a cracking start and held potential promise for another great year. The US economy was humming and outside our borders, trading partners were beginning to see expansion after two quarters of lackluster results.

By March 23, the S&P index of the largest US corporations had dived more than 35%. The severity and rapidity of the decline stunned investors. The Coronavirus epidemic that had paralyzed China became a pandemic.

In early runs, Western statistical models predicted shocking numbers of deaths. World leaders, including in the US, were convinced by epidemiologists that the only viable method to avoid disaster in the absence of neither vaccine nor therapeutic cure was to shut down the world’s economy and implore citizens to avoid close contact with anyone outside their homes.

During the last week of February, the first quarter of 2020 turned from a continuation of 2019’s banner year into a selloff of a magnitude that none expected, and few had ever experienced. Panic and near panic gripped the investment community and the public for the better part of six weeks.

During this intense period, volatility rose to levels not seen since 1987 and extreme intra‐day rallies and declines became as commonplace as triple‐digit daily gains or losses in the S&P 500. The widely followed Dow Jones Industrial Average posted numerous daily fluctuations of 1,000 points or more. Oil and gasoline prices plummeted as demand declined, exacerbated by a Saudi/Russian price war. More than 10 million workers applied for Unemployment Insurance Benefits in the final two weeks of the quarter.1 The chart below shows the damage to global equity indexes as of March 31.

The US and many European economies remain shut down at this writing. The President’s current virus mitigation guidelines call for remaining at home as much as possible through the end of April. Whether this time horizon remains in place depends on myriad factors, but the two most important considerations remain controlling the spread of the virus and assessment of the ability of the world and US economies to withstand and eventually rebound from another three weeks of stasis.

In normal times, astute investors would be able to spot emerging signals that economic growth was preparing to reverse its current negative momentum. Commodity prices would be rising as raw material demand started to increase. Interest rates would be percolating higher as loan demand increased to reflect businesses reawakening. But these are not normal times. Large swaths of the planet remain in an enforced shutdown. The Dow Jones Commodity Index mirrors the state of the world’s economies. 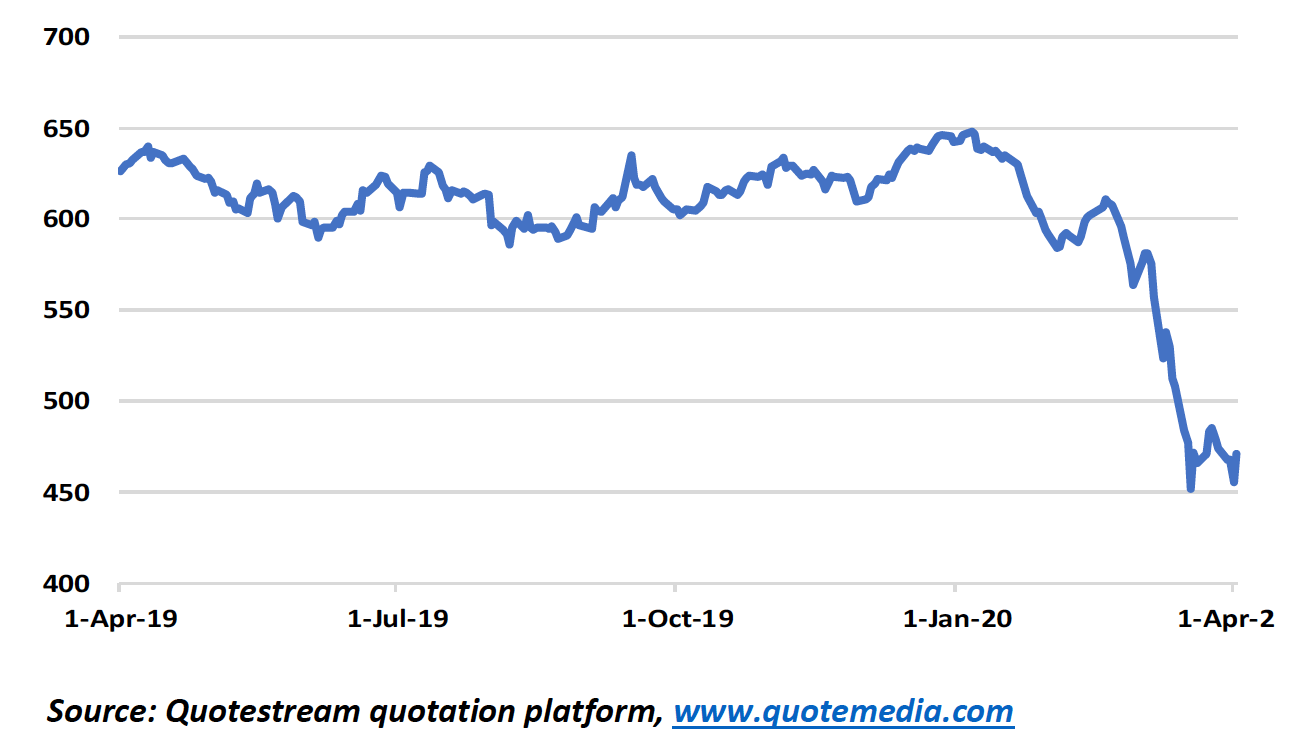 There is little point dwelling on the first quarter’s numbers. They are behind investors and those who managed to remain disciplined, ignore sensationalized reporting and to focus on a longer term outlook are still invested and positioned for an inevitable recovery. In fact, as the first quarter ended, the tenor and intensity of market declines began to change, rallies became more frequent, volatility began to diminish somewhat, and market participants and investors alike began to possibly perceive a faint light ahead.

The President and his counterparts in other nations are walking a knife’s edge. In order to effectively halt the spread of new cases and deaths, medical advisors are pushing for extended no contact periods based on models predicting scenarios no one wishes to endure.

The conundrum is that model outputs keep changing. Almost daily, runs are evolving favorably showing declining numbers of expected infections, hospitalizations and deaths. Models are reflecting actual conditions that, in the US at least, are not proving as severe as expected even a few days previously. Spain and Italy, the two worst hotspots in Europe are now recording persistent new hospitalization declines.2

Mitigation and economic recovery remain in a tension that seems nearly impossible to resolve. The President’s medical “generals” are adamant that reopening the US too quickly could well lead to a resurgence of the virus. One of the most dangerous characteristics of the disease is its ability to be spread easily by persons without apparent symptoms. Relaxing social distancing guidelines too early without more extensive testing to identify carriers could lead to a second wave. However, leaving the economy shuttered much longer could result in impacts far more difficult to reverse than currently anticipated.

Equity markets will begin recovering well in advance of economic conditions. As noted above, selling intensity in US markets has moderated over the past week, but whether this is simply exhaustion, or the beginning of a longer term recovery is impossible to know. The problem is that identifying when that move commences will only be accurately determined by hindsight.

So, what do we know other than an expectation that markets will recover? Unfortunately, nothing will definitively alert us that a lasting upswing has begun but reviewing history and investment philosophy can still offer some pertinent insights.

Remaining disciplined when many are panicking is difficult. Yet, many investors have successfully resisted the emotional urge to simply “chuck it all until things get better.” These courageous stalwarts have benefited from their advisors’ advice and will be full participants when markets recover.

We can’t know whether equity markets have already recorded their worst levels or if they will eventually break below the March 23rd lows. In advance of such periods of discomfort, having a long-term perspective, appropriate diversification, and an asset allocation that aligns with your risk tolerance and goals can help you remain disciplined enough to ride out the storm.

This content is developed from sources believed to be providing accurate information. It may not be used for the purpose of avoiding any federal tax penalties. Please consult legal or tax professionals for specific information regarding your individual situation. The opinions expressed and material provided are for general information, and should not be considered a solicitation for the purchase or sale of any security.