September is traditionally one of the weakest months on the equity market calendar and this year was no exception. After a strong start, which saw the NASDAQ Composite, S&P 500, and the DJTMI post new all-time highs on September 2nd, markets turned choppy and exhibited a downward bias through the end of the month. Despite the less than exciting finish, most global equity markets posted strong quarters, adding to April‐June gains. Performance of broad based global equity indexes for September, the third quarter and 2020 through September 30 are displayed below.

The clear winner, as has been the case for the bulk of 2020, is the NASDAQ Composite, although its stumble in September diminished overall gains for the year. Tech stocks, and in particular giants such as Amazon (OTC‐AMZN) and Apple Computer (OTC‐AAPL) have enjoyed strong corporate earnings and revenue gains fueled by sharp increases in Covid‐19 related online activity. As the impact of shutdowns has receded, questions about the longevity of recent earnings upsurges surfaced late in the quarter, leading to several sharp downdrafts for the Comp during September.

Over the last three years, the tech sector has been one of the strongest growth engines of the US equity markets. Rich valuations have been borne out by robust earnings and the sector has been a continuous leader during both advances and declines.

But leadership can change and as we’ve noted, “trees don’t grow to the sky.” Can the markets move into new record territory without support from the tech sector? Or has the US economy permanently transitioned to an on balance online base as its engine for future growth?

Third quarter GDP growth is likely to rise over 30% on an annualized basis, a figure predicted by the Federal Reserve Bank of Atlanta’s GDPNow tool.1 The gain will likely prove a mirror of the second quarter’s 33%+ decline. But simple math show that after a decline of 33%, a 50% gain is needed to fully offset the previous losses. Clearly, much more ground must be regained before the economy’s output matches or exceeds pre‐pandemic levels.

Can we expect the tech sector to continue to lead the economy back from its spring abyss?

The answer is a firm, “Perhaps.” Market history shows that top performing stocks eventually enter periods of slower and even negative growth relative to total market performance. The chart below illustrates changes that have occurred after periods of strong growth for leaders. 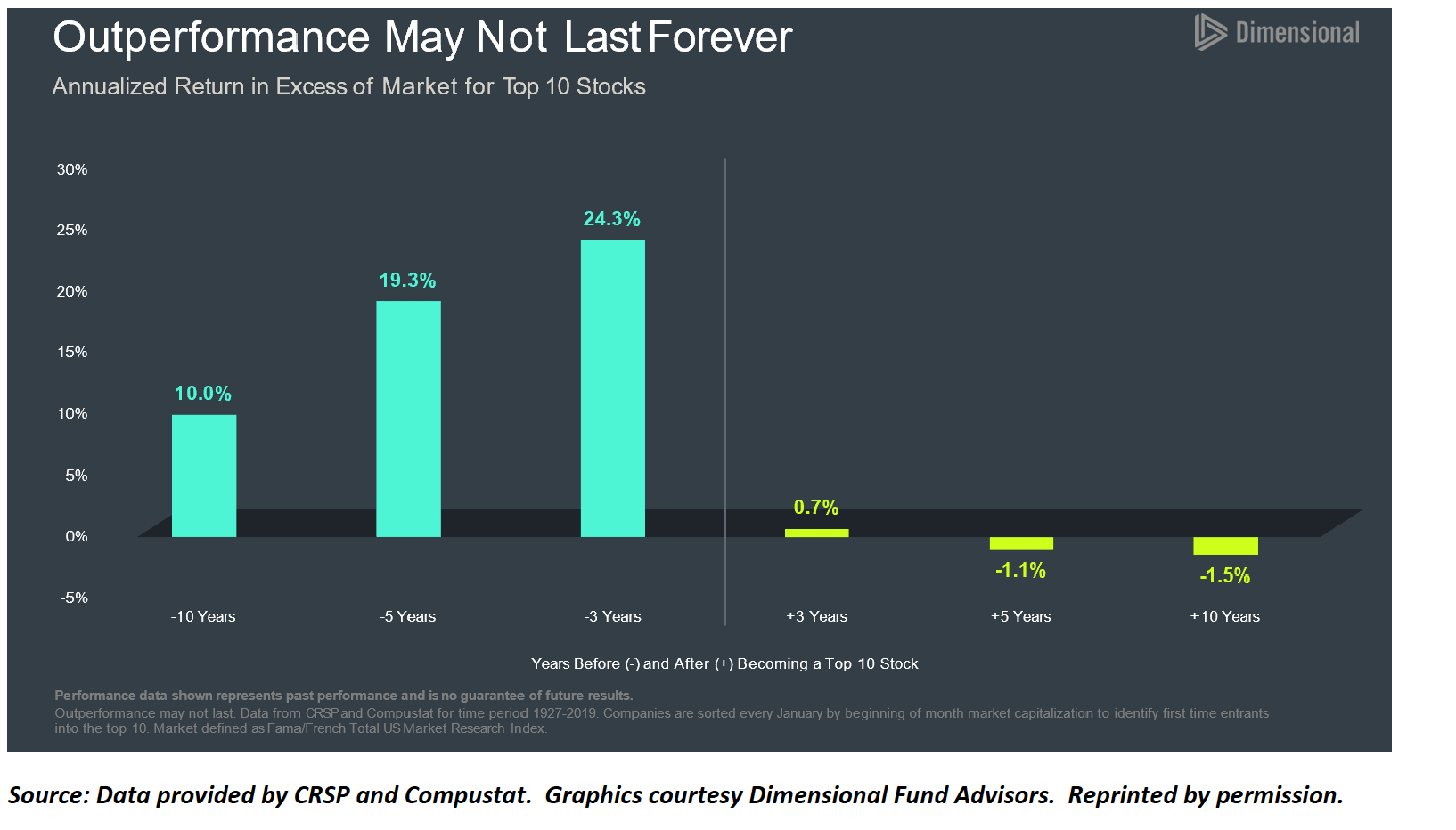 This chart is a historical record and not intended to predict specific future performance. Note that periods are a minimum of three years before and after peak performance of market leaders. The conclusion that can be drawn from the above is that equity market leaders eventually falter. The chart depicts excess returns of leaders compared to the market, not necessarily future net negative returns.

As the global economy recovers and begins to function on a more normal footing, we may see new “top 10” stocks to come to the forefront. Perhaps the most important information that can be taken from the above chart is that diversification matters in a long term investment strategy. “Following the leader(s)” can result in a less than desirable outcome over time.

We don’t pretend to know the next market standouts. What we can assert with confidence is that more traditional sectors of growth such as manufacturing are recovering and that many “lower tech” stocks are changing hands at valuations still quite low by historical standards. Dividend yields for numerous large, well‐known companies remain at levels more suggestive of bottoms than market peaks.

Since the equity lows in late March, we’ve highlighted the recovery in commodity prices several times as indicative of a resurgence of economic growth. Copper, which is estimated to be a component in roughly 50% of manufactured goods, suggests expansion is ongoing.

Similarly, transportation stocks such as railroads, truckers and airlines were standout performers over the past quarter. The Dow Jones Transportation Average, which briefly bettered its mid‐September 2018 record high during intraday trading on September 2, closed in new all‐time high territory on October 7. In our view, this supports a conclusion that online activity is being joined by an upswing in the movement of goods and anticipation of a broad resumption of travel. Dow Transports closing prices over the past 2 years are shown below.

The 20 issues in the Average are conduits of goods and means of travel. They represent physical movement. Their health is a manifestation that the recovery is likely to continue and broaden beyond sectors fueled mainly by online activity. Internet commerce over the past 8 months dramatically expanded earnings for shippers in the Average such as FedEx (NYSE‐FDX) and United Parcel Svc. (NYSE‐UPS) but new records for this benchmark mean that railroads, truckers, and airlines are turning higher as well.

It is unreasonable to expect a continuation of the magnitude of rebound in third quarter GDP in the fourth quarter and beyond, but we can assert that growth trends in the US economy are strong and persistent, which has been reflected in the ongoing resilience of equity markets over the past 45 days.

Less than four weeks remain until Election Day. Presidential polls have tightened nationally and in battleground states, however Democrats still lead in most polls. The two parties’ platforms have sharpened in voters’ awareness and clearly perceptions differ substantially in near term outlooks and in the outlines of proposed policies.

Democrats, based on their legislative proposals and policy statements, remain convinced that the Covid‐19 virus is an ongoing, essentially uncontrolled threat to the US population and that government guidance is essential to its elimination. Mass shutdown orders remain open in several so‐called blue states and cities. Away from the virus, the centerpiece of the Democrat platform appears to advocacy for significantly higher taxes and spending.

Republicans have chosen to focus on reducing and/or eliminating restraints on commerce. They point to very high survival rates in Covid‐19 cases as evidence that the virus is not an existential threat to a vast majority of the US population.2, 3 President Trump’s rapid recovery from a bout with the disease seems to suggest that effective therapeutic treatments are available that can mitigate disease‐related morbidity. The Republican platform stresses market solutions, spending restraint and further reductions in taxes.

On November 3rd, voters will decide which view they prefer. Mail in voting in many areas could delay a definitive result but we suspect the winner will emerge sooner rather than later. Citizens have a responsibility to vote. Choices are not always attractive or easy, but we remain confident markets will adapt, regardless of the outcome.

This content is developed from sources believed to be providing accurate information. It may not be used for the purpose of avoiding any federal tax penalties. Please consult legal or tax professionals for specific information regarding your individual situation. The opinions expressed and material provided are for general information, and should not be considered a solicitation for the purchase or sale of any security.