Strong first quarter earnings and gathering momentum in the global economy are helping world equity prices extend their advance. Most domestic benchmark indexes have posted new all‐time highs during the past two weeks, including the previously lagging NASDAQ Comp, which finally bettered its mid‐February peak this week. International and Emerging Markets stocks are also gaining but remain below comparable highs.

Volatility has diminished markedly this month, accompanied by a slowdown in volume that began to develop in late March. Bond yields have been steady despite exhortations from the press and financial pundits that the flood of new spending proposals from the Biden Administration will inexorably lead to accelerating inflation.

March 31 quarterly corporate earnings gains have been among the strongest in more than a decade. Reports in myriad industries have consistently exceeded expectations and where guidance for the balance of the year has been provided, future strong comparisons are expected.

While year to year increases were certainly expected, contrasted with 2020’s essentially closed economy, results have been, in many cases, complete surprises. The chart below illustrates quarterly profit margins for the S&P 500 from Q4 2016 through estimates and reports for Q1 2021. 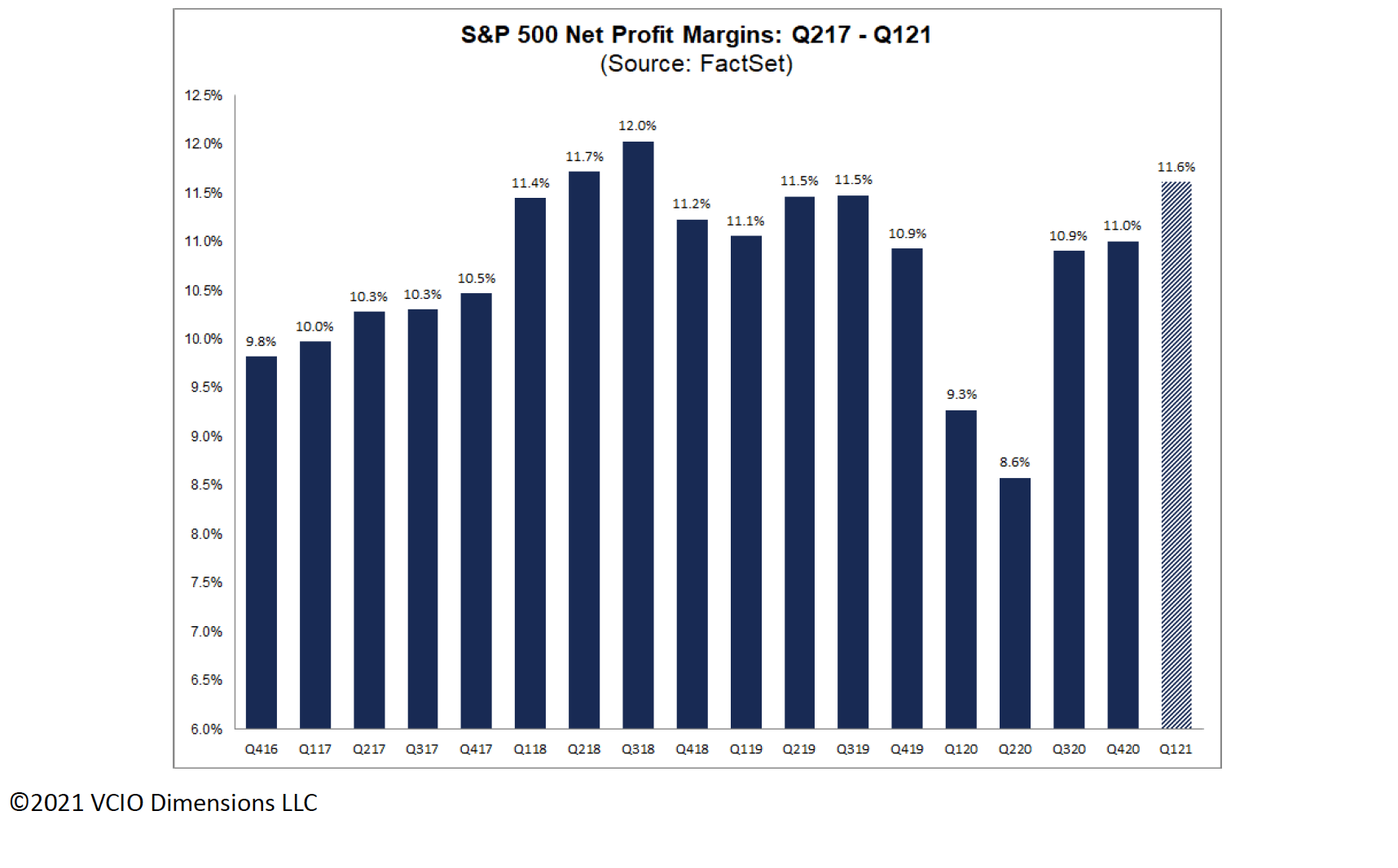 Earlier this year, we discussed long term inflation trends in the US. Recall that the average annual rate since the 1920s has been roughly 3%. In the most recent release (March), the Producer Price Index jumped to an annualized rate of 4.2% over the last 12 months. The largest sector increase was in finished goods, which are products ready for end users, such as consumers.1

Bond yields, the most inflation sensitive sector in the financial markets, have traded in a narrow range within striking distance of their post‐pandemic highs this month. Another indicator of inflationary expectations is the dollar, which after a spring decline has recovered to a level that does not suggest significant concerns.

So, what’s going on? Are bond investors and currency traders ignoring publicized threats of inflation? Is this time different?

Press reports on the Fed’s extensive dollar creation activities routinely, with great certainty, assert that inflation resulting from the flood of newly created dollars is inevitable. If we’ve learned anything in decades of observing markets, it is that when the press is full of “certainty” about future events, markets have already discounted those predictions.

Another factor cited by pundits in their conclusions that serious inflation is on the way is the trend of commodity prices. It is undeniable that the costs of raw materials, grains and energy have risen dramatically over the past 12 months. But is this a long term trend or, citing the Fed’s word, “transitory?”

Below is a chart of the Dow Jones Commodity Index since April 2019. Clearly, prices have advanced significantly, and the index has posted new all‐time highs this year almost as frequently as equity benchmarks. 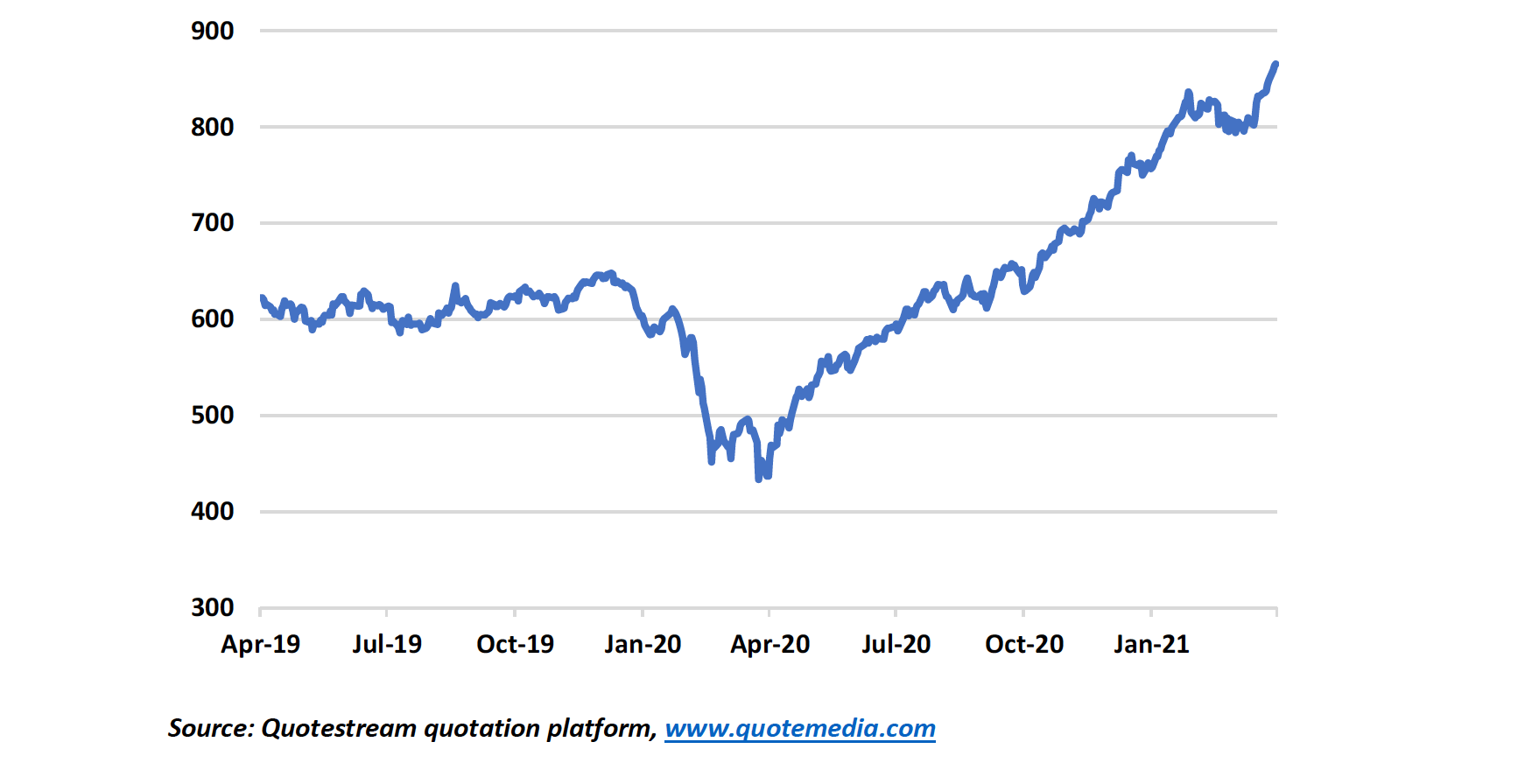 What the chart depicts is an imbalance between supply and demand, which aside from periodic weather influences that can affect production, drives commodity prices.

The question remains, however, are we seeing a vast upswell of consumer and manufacturer purchasing forcing prices higher in the face of limited supply? Or is there another possibility?

During last year’s economic shutdown, manufacturing activity in all but the most essential industries (food and energy, for example) ground to a halt. Normal accumulation of raw materials was suspended, and inventories were drawn down to subsistence levels. The chart below illustrates the somewhat obscure Inventory/Sales ratio through March, but plainly illustrates that current inventory levels compared to sales have been near historic lows since shortly after the onset of the Covid activity suspensions.

The ratio illustrates monthly inventory values divided by sales. High numbers indicate overabundant inventories, low figures, the converse. A healthy figure is 1.40‐1.45, or just under 1ó month’s inventory on hand. The uptick during 2021 indicates that depleted inventories are beginning to rebuild as the economy recovers and demand for finished goods increases. Not unexpected, but are factories responding to burgeoning consumer and manufacturing demand being pressured by output constraints, a sign of lasting inflation?

Below is a chart of capacity utilization rates in the US economy since the mid‐1960s. During the most recent inflationary events in the 1970s, rates were approaching 90%. Currently, significant unused production capabilities exist in the economy.

Conclusions that can reasonably be deduced from these data are that demand for raw materials has accelerated, inventories are low and likely being rebuilt, and there is little threat this activity will create production bottlenecks due to capacity constraints. Hence, the Fed’s description of recent upticks in year to year inflation as, “transitory.”

As inventories return to more normal levels and sales increase in a worldwide recovery, the Inventory/Sales ratio is likely to return to its long term average level, relieving pricing pressure on material costs.

Like any other quasi‐predictive statement, this analysis could be wrong. Random, unforeseeable events have a habit of appearing, as witnessed in 2020. But we rate the scenario as highly likely given past performance during similar recession/recovery scenarios. In other words, we give greater weight to forward looking bond market investors than to the financial press. Credit markets, at least for now, do not appear to see an imminent cyclical uptrend in inflation.

President Biden presented nearly $2 trillion of new proposed spending in his speech to Congress and the nation April 28. If enacted in combination with the two previous proposals, newly appropriated and potential outlays will total close to $6 trillion since Mr. Biden took office.

It is important to remember that “the President proposes, and Congress disposes”. Debate on the infrastructure legislation sent to Congress earlier this month is not likely to begin until summer at the earliest, so it is certainly understandable that markets are reserving judgement on any new entitlement programs and taxes until more concrete details are known.

The President has invited Republicans to participate in meetings that allow them to air alternative proposals but, to date, no evidence of any “give” on the part of Democrats has emerged. If, in the Senate, the filibuster is eliminated and/or the so‐called reconciliation process is invoked, any or all these bills could be enacted by a simple majority. Investors will speak when the ultimate details of new spending and taxes take shape. Voters will make their voices heard in November 2022.